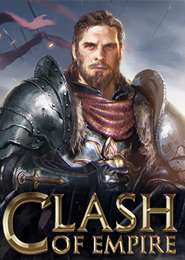 Clash of Empire COE is a Global massive epic strategy multiplayer mobile game, strives to reproduce the medieval magic battlefield through exciting war scenes and real-time strategy. You, as a lord, will build your own empire, develop civilization, train army, kill monsters, rally your allies to capture territory, defeat the enemies from all over the world, seize the throne, fight for glory!